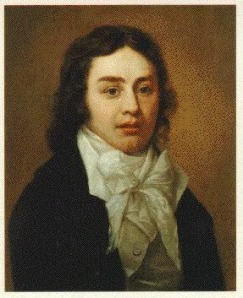 [To read other chapters, click here.]
The characteristic defects of Wordsworth’s poetry, with the principles
from which the judgment, that they are defects, is deduced–Their
proportion to the beauties–For the greatest part characteristic of
his theory only.

Remarks on the present mode of conducting critical journals.

The former subject continued–The neutral style, or that common to
Prose and Poetry, exemplified by specimens from Chaucer, Herbert, and
others.

Continuation–Concerning the real object which, it is probable, Mr.
Wordsworth
had before him in his critical preface–Elucidation and
application of this.

Language of metrical composition, why and wherein essentially
different from that of prose–Origin and elements of metre–Its
necessary consequences, and the conditions thereby imposed on the
metrical writer in the choice of his diction.

[66]  It is no less an error in teachers, than a torment to the poor
children, to enforce the necessity of reading as they would talk. In
order to cure them of singing as it is called, that is, of too great a
difference, the child is made to repeat the words with his eyes from
off the book; and then, indeed, his tones resemble talking, as far as
his fears, tears and trembling will permit. But as soon as the eye is
again directed to the printed page, the spell begins anew; for an
instinctive sense tells the child’s feelings, that to utter its own
momentary thoughts, and to recite the written thoughts of another, as
of another, and a far wiser than himself, are two widely different
things; and as the two acts are accompanied with widely different
feelings, so must they justify different modes of enunciation. Joseph
Lancaster, among his other sophistications of the excellent Dr. Bell’s
invaluable system, cures this fault of singing, by hanging fetters and
chains on the child, to the music of which one of his school-fellows,
who walks before, dolefully chants out the child’s last speech and
confession, birth, parentage, and education. And this soul-benumbing
ignominy, this unholy and heart-hardening burlesque on the last
fearful infliction of outraged law, in pronouncing the sentence to
which the stern and familiarized judge not seldom bursts into tears,
has been extolled as a happy and ingenious method of remedying–what?
and how?–why, one extreme in order to introduce another, scarce less
distant from good sense, and certainly likely to have worse moral
effects, by enforcing a semblance of petulant ease and self-
sufficiency, in repression and possible after-perversion of the
natural feelings. I have to beg Dr. Bell’s pardon for this connection
of the two names, but he knows that contrast is no less powerful a
cause of association than likeness.

[67] Altered from the description of Night-Mair in the REMORSE.
“Oh Heaven! ’twas frightful! Now ran down and stared at
By hideous shapes that cannot be remembered;
Now seeing nothing and imagining nothing;
But only being afraid–stifled with fear!
While every goodly or familiar form
Had a strange power of spreading terror round me!”
N.B.–Though Shakespeare has, for his own all justifying purposes,
introduced the Night-Mare with her own foals, yet Mair means a Sister,
or perhaps a Hag.

[68] But still more by the mechanical system of philosophy which has
needlessly infected our theological opinions, and teaching us to
consider the world in its relation to god, as of a building to its
mason, leaves the idea of omnipresence a mere abstract notion in the
stateroom of our reason.

[69] As the ingenious gentleman under the influence of the Tragic Muse
contrived to dislocate, “I wish you a good morning, Sir! Thank you,
Sir, and I wish you the same,” into two blank-verse heroics:–
To you a morning good, good Sir! I wish.
You, Sir! I thank: to you the same wish I.
In those parts of Mr. Wordsworth’s works which I have thoroughly
studied, I find fewer instances in which this would be practicable
than I have met to many poems, where an approximation of prose has
been sedulously and on system guarded against. Indeed excepting the
stanzas already quoted from THE SAILOR’S MOTHER, I can recollect but
one instance: that is to say, a short passage of four or five lines in
THE BROTHERS, that model of English pastoral, which I never yet read
with unclouded eye.–“James, pointing to its summit, over which they
had all purposed to return together, informed them that he would wait
for them there. They parted, and his comrades passed that way some two
hours after, but they did not find him at the appointed place, _a
circumstance of which they took no heed:_ but one of them, going by
chance into the house, which at this time was James’s house, learnt
_there,_ that nobody had seen him all that day.” The only change which
has been made is in the position of the little word there in two
instances, the position in the original being clearly such as is not
adopted in ordinary conversation. The other words printed in italics
were so marked because, though good and genuine English, they are not
the phraseology of common conversation either in the word put in
apposition, or in the connection by the genitive pronoun. Men in
general would have said, “but that was a circumstance they paid no
attention to, or took no notice of;” and the language is, on the
theory of the preface, justified only by the narrator’s being the
Vicar. Yet if any ear could suspect, that these sentences were ever
printed as metre, on those very words alone could the suspicion have
been grounded.

Examination of the tenets peculiar to Mr. Wordsworth–Rustic life
(above all, low and rustic life) especially unfavourable to the
formation of a human diction–The best parts of language the product
of philosophers, not of clowns or shepherds–Poetry essentially ideal
and generic–The language of Milton as much the language of real life,
yea, incomparably more so than that of the cottager.

Striking points of difference between the Poets of the present age and
those of the fifteenth and sixteenth centuries–Wish expressed for the
union of the characteristic merits of both.

[63] These thoughts were suggested to me during the perusal of the
Madrigals of Giovambatista Strozzi published in Florence in May, 1593,
by his sons Lorenzo and Filippo Strozzi, with a dedication to their
paternal uncle, Signor Leone Strozzi, Generale delle battaglie di
Santa Chiesa. As I do not remember to have seen either the poems or
their author mentioned in any English work, or to have found them in
any of the common collections of Italian poetry; and as the little
work is of rare occurrence; I will transcribe a few specimens. I have
seldom met with compositions that possessed, to my feelings, more of
that satisfying entireness, that complete adequateness of the manner
to the matter which so charms us in Anacreon, joined with the
tenderness, and more than the delicacy of Catullus. Trifles as they
are, they were probably elaborated with great care; yet to the perusal
we refer them to a spontaneous energy rather than to voluntary effort.
To a cultivated taste there is a delight in perfection for its own
sake, independently of the material in which it is manifested, that
none but a cultivated taste can understand or appreciate.
After what I have advanced, it would appear presumption to offer a
translation; even if the attempt were not discouraged by the different
genius of the English mind and language, which demands a denser body
of thought as the condition of a high polish, than the Italian. I
cannot but deem it likewise an advantage in the Italian tongue, in
many other respects inferior to our own, that the language of poetry
is more distinct from that of prose than with us. From the earlier
appearance and established primacy of the Tuscan. poets, concurring
with the number of independent states, and the diversity of written
dialects, the Italians have gained a poetic idiom, as the Greeks
before them had obtained from the same causes with greater and more
various discriminations, for example, the Ionic for their heroic
verses; the Attic for their iambic; and the two modes of the Doric for
the lyric or sacerdotal, and the pastoral, the distinctions of which
were doubtless more obvious to the Greeks themselves than they are to
us.
I will venture to add one other observation before I proceed to the
transcription. I am aware that the sentiments which I have avowed
concerning the points of difference between the poetry of the present
age, and that of the period between 1500 and 1650, are the reverse of
the opinion commonly entertained. I was conversing on this subject
with a friend, when the servant, a worthy and sensible woman, coming
in, I placed before her two engravings, the one a pinky-coloured plate
of the day, the other a masterly etching by Salvator Rosa from one of
his own pictures. On pressing her to tell us, which she preferred,
after a little blushing and flutter of feeling, she replied “Why,
that, Sir, to be sure! (pointing to the ware from the Fleet-street
print shops);–it’s so neat and elegant. T’other is such a scratchy
slovenly thing.” An artist, whose writings are scarcely less valuable
than his pictures, and to whose authority more deference will be
willingly paid, than I could even wish should be shown to mine, has
told us, and from his own experience too, that good taste must be
acquired, and like all other good things, is the result of thought and
the submissive study of the best models. If it be asked, “But what
shall I deem such?”–the answer is; presume those to be the best, the
reputation of which has been matured into fame by the consent of ages.
For wisdom always has a final majority, if not by conviction, yet by
acquiescence. In addition to Sir J. Reynolds I may mention Harris of
Salisbury; who in one of his philosophical disquisitions has written
on the means of acquiring a just taste with the precision of
Aristotle, and the elegance of Quinctilian.

The specific symptoms of poetic power elucidated in a critical
analysis of Shakespeare’s Venus and Adonis and Lucrece.

[61]  ‘Anaer morionous, a phrase which I have borrowed from a Greek
monk, who applies it to a Patriarch of Constantinople. I might have
said, that I have reclaimed, rather than borrowed, it: for it seems to
belong to Shakespeare, de jure singulari, et ex privilegio naturae.